“His hair was perfect”—Warren Zevon(1)

The werewolf begins in an act of hubris—magic or affliction—and ironically or not thrusts the subject inward, identifying one with the earth and its rhythms; the beat and the scream, claw and root and tooth. Come along: what does Wolf teach us about our Life, this process of becoming? Night stretches out, unfurls, and settles like muslin across the earth. Moon grows fat, obscured by cloud. Age accrues, a stacking of birthdays, gray cake toppling, oozing sunsets and cycles of Orion and his hound. What must be left behind, or superseded? Ovid’s verses give us an opening, a gate in our chests we can walk through, if slightly hunched: Lycaon, mad and cruel Arcadian king, cursed into wolf form by the angry god Zeus, whom he’d tried to trick with a plate of human flesh.(2) We note that through this exchange, the god too is transformed, given a taste for sapiens and worshipped as Lycaean Zeus (Wolf Zeus), honored with human sacrifice upon the mountain bearing his epithet.(3) 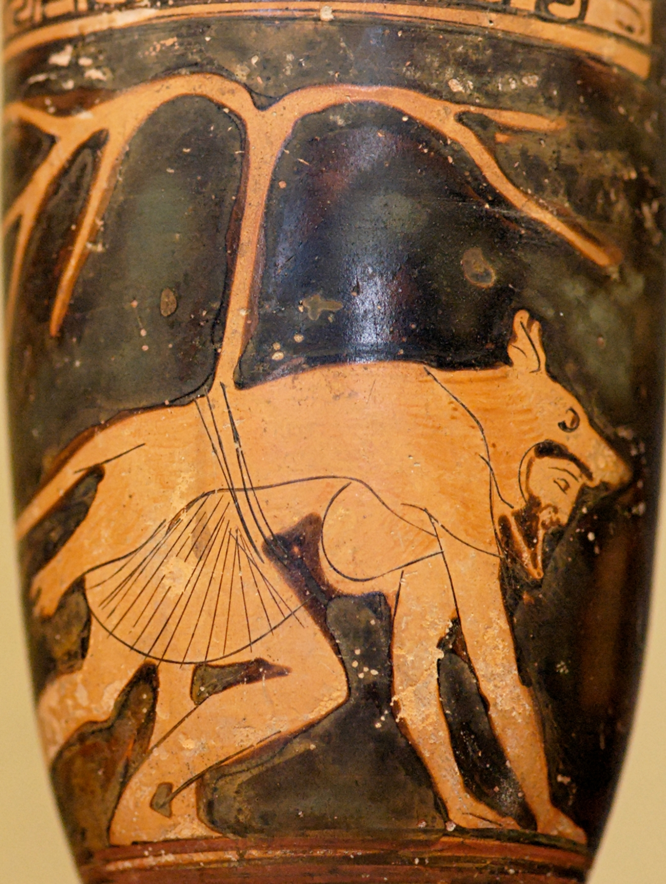 From malediction to invocation we turn—turning to face that which we fear, naked as In the Beginning—turning the beast inside out to clothe ourselves in the fabric of nightmare (as did the Trojan spy Dolon, depicted on this vase from 460 BCE.)

This identification with the hidden and the monstrous is recounted by diverse classical and medieval sources. The Dutch weerwolven gain shapeshifting power through a pact with the devil, receiving magical ointment and a belt of wolfskin to effect the metamorphosis.(4) In the Viking heathen tradition, father and son Sigmund and Sinfjotli find themselves transformed into ravenous, murderous wolves after donning enchanted wolfskins they have stolen.(5) Such tales hide and hint at a shamanic process: enter this bestial realm through morally ambiguous acts of devotion and sorcery, and find oneself in thrall to one’s own in/human urges.

The ointment, the pelt, incantations and proscribed acts such as drinking rainwater from a wolf’s paw print—and of course the ubiquitously salacious trafficking with Satan—are perhaps sympathetic, psychoactive triggers to accessing a pre-linguistic, pre-democratic state of permissiveness.(6) (7) Here, all roads lead to Remus and Romulus. Take off your own skin, stretch into a more carnivorous role.

The wolf’s vestment throughout much of Europe is that of apex predator, jaws snapping on livestock, children, woodsmen and maidens; but this is just one subjective expression of a near universal embodiment of Otherness as source of pain and terror. Flight of the rabbit, the doomed sprint toward Life, from Hunger. Follow the moon’s circuit and watch rise the monster with a thousand masks. Look to Ethiopia, Morocco, Sudan: in the wolf’s hollow path we find instead the hyena’s prints: the bouda-humans who assume the familiar outbursting of the beast; but also, curiously, hyena who shroud themselves as human to work their mischief and malice in society.

A further cue demonstrates the monstrousness of the process of Othering: the disruptive crimes of the bouda are often blamed on the transgressive alchemical mystique of blacksmiths—once a caste profession of the socially persecuted Ethiopian Jews. What remains is the faded impression of a chthonic or pyromantic rite described as involving a magical stick and a scattering of ashes. (So too the Somalian bouda affect their transformation by rubbing themselves with a special stick or staff at sundown.)(8)

Cross the Atlantic Ocean. The Guarani luison, native to Argentina, Uruguay, Paraguay, lurking denizen of burial plots, morphs with waves of European colonization from shrouded night-spirit into something more equivalent to our Lon Chaney wolfman.(9) Now northward through jungle and desert, run with the Mesoamerican naguales (nahuales), powerful brujos who morph into wolf, puma, or jaguar to slake their bloodlust in acts of atrocity—or undergo heroic feats to aid their communities, depending on who is telling the story.

“Around Mexico’s eastern mountain ranges, rural communities believe there are some individuals among them who can shape-shift into animals in the dark. I often heard terrifying tales when I was growing up in the region, as it was common for the locals to be scared of night and darkness, the time when Nahuales roam freely—fearful of their capacity for evil. ‘Don’t go to into the woods during a New Moon,’ they used to tell me, ‘for there hunts a man, with the tail of a lizard and the head of a coyote, who will not hesitate to eat you.’”—Oliver G. Alvar (10)

Let us continue: into Louisiana, Wisconsin, Ohio. From the swamp to the riverbank, the alley and the overpass, the forest and the graveyard. The North American continent, particularly its rural and wilderness regions, is home to a dizzying variety of cryptids. Often the monster’s ontology accrues from misinterpreted or misrepresented indigenous mythologies stacked alongside tales imported by European colonists, conspiracy theories rumouring black- box military experiments, and Americans’ general pulp noir sensibility: the hulking amalgam of dog and ape seen by motorist Mark Schackelman in 1936, or the hairy creatures with “fire red eyes that glow in darkness.” associated with UFO sightings in rural Pennsylvania in the early 1970s.(11) (12) (13)

Humans' capacity for misunderstanding one another, falling prey to natural and social and spiritual pressures, may be one of our truest and most basic features. Stumbling into the light, we often find more darkness. How do we mirror ourselves in the transformations we enact? And those into which we just fall? Germany, 1725: “Peter the Wild Boy”, guttural foundling, was caught roaming the forest on all fours, a child said by some to have been raised by wolves. He subsequently became the kept pet of British Kings George the 1 and 2.(14) Brooklynite Albert Fish, the “Werewolf of Wysteria”, ate raw meat every full moon and later turned to eating children. Emily Isabella Burt from the state of Georgia was suspected of lycanthropy, sustained a bullet wound while in lupine form, and was eventually treated for her werewolfism by a Parisian doctor before living out her life peacefully at home.(15)

On the Iberian Peninsula the curse of lycanthropy is intergenerational: seventh- born sons may become Lobishomen, transforming not only into wolves but more mundane creatures as well.(16)

As told by physicist and religious scholar Jose Leitao, “Most stories you find about Portuguese werewolves... they basically just turn into horses and donkeys, and they don’t really do much. Another name for them is just Runners...they just run. And then in the morning you are wasted. And that’s basically it.... It’s anticlimactic.”(17)

From Beowulf to Mikhail Popkov(18), brutality has often worn the beast’s face, lest we come too close to facing ourselves. In the Other we can deposit our basest aggressions and feelings of personal failure; whip the old scapegoat and escape the harshest gnosis of humanity’s inner workings.

“We do not make such an elementary mistake in our witchcraft, as we view nature as she is, not as a projection of our own disintegrated failure to be complete. The wolf finds its own family.”(19)

Perhaps by repressing the animal drive, we curse ourselves to rerun the old vicious programs in the name of Order—inadvertently generating, by Law of Polarity, Order’s opposite, Reason’s opposite. An overabundance of socialisation, pacification unchecked, pressurizes and poisons the human condition. Separated from our emotional depths and from the deepest rhythms of Nature, humankind invents and plagiarizes a vision of cruelest base individualism amplified and feeding back like the whine of unattended instruments. If there is no song, no howl, no tonal cohesion within ourselves and our packs, then the tumultuous promise of Endings and Beginnings, iridescent Unveilings, just remains an empty frequency. Where has the path led us? Toward total fracture, or restorative reintegration?

“I’m done feeling guilty of who I am and what I want. I am worthy of the things I desire. I am allowed to have edges. I stand in my own power and I honor myself. Do I need to turn around on the dirt path in the woods and battle the wolf for survival? I don’t think so. Maybe all it takes is to coax the wolf across the threshold of my home and set it in front of the fire to warm it from the cold.”—Ryan Aghamohammadi(20)

(16) Tristan Shaw, ”The Lobishomen: A Werewolf Whose Blood Can Kill You” , bizarreandgrotesque.com Aug 9 2015

(19) Peter Grey, Apocalyptic Witchcraft, “The Wolf Sent Forth To Snatch Away a Lamb”, p 113

Jason Triefenbach is an artist, writer, and non-denominational minister with a garden and a lifelong interest in lurking around the Occult/ Paranormal shelves in bookstores worldwide. As Hermetic Library Anthology Artist Sun Duel he records and sometimes performs music with a variety of friends and loved ones. Find him on his website.